This unique trap is patent pending and was designed by inventor Randy Jack.

The unique circle frame of this trap eliminates straight walls and corners for the animal to push against after being trapped. 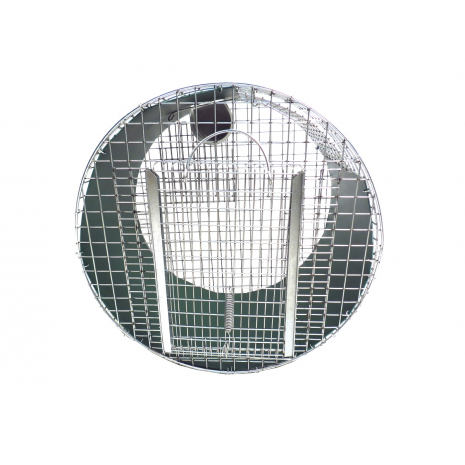 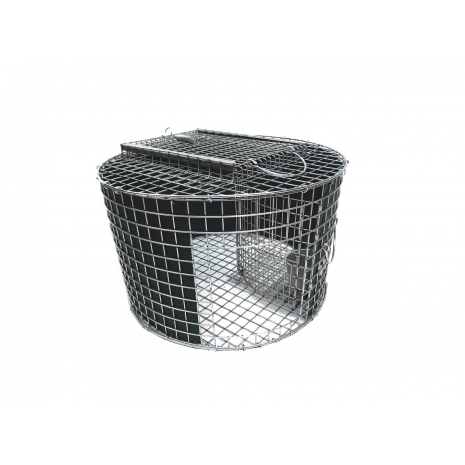 Works great and well made.

This trap is easy to use. I trapped a hard to trap kitty in under 5 minutes after i saw him hanging around. He was off to clinic in an hour. Very easy to set up, transfer...really well made and spacious. It is set as we speak for another elusive, wary cat. Highly recommend! - Anonymous

I have a feral cat that escaped a traditional humane trap. After that experience, she would not get close to the original trap. We ordered the Roundhouse trap and she couldn’t resist walking in. We were able to easily transfer her for transport to the vet to get her spayed so we could release her. The Roundhouse trap is extremely well made and such a clever design. Perfect for TNR programs. Thanks for a great product! - Heather B

I purchased this trap due to a difficult to catch feral cat breaking and getting out of my previous conventional trap. I would highly recommend this product to anyone looking to trap crafty animals. The trap sets very easily and once the animal is in, there is no way they can get out unlike the other standard common traps where if strong enough, the cat can get under the closed door and bend/break the metal. No such issue with this trap, in fact, a few days after I set the trap I was able to catch the feral cat i've been having so many issues with. Great product! - Joel

The roundhouse trap is awesome. I had been trying for 2 months the trap 2 stray kittens. I caught the first kitty within moments of setting the trap. The next day I caught the 2nd kitty in about 30 minutes. They're fantastic and I would recommend them to anyone trying to catch small animals. They're also very well made, will probably outlast me. - Jeannette

I like the idea of no corners for a live trap. It arrived on time and as advertised. It did have some sharp metal pieces sticking up at the top of the door, which was leaning a bit inward. My husband filed those and put tape over them so the feral cat would not rip up her paws and claws trying to pull on it. Overall very well-built. The cat was too smart to be trapped, though. I ended up picking her up (I had done a lot of bonding with her each morning) and bringing her in the door to the house. - Anonymous

I had tried to trap a skittish pregnant stray cat for weeks using a regular rectangle trap that I had spent much more money on, she wouldn't go in it, even though I tried every trick in the book. I set this trap and originally put the bowls just inside for two days, on the third set the bowl in the trigger plate and it worked like a charm. I set it, went inside and watched her trot right up and get trapped. Now kitty is safe inside where it is safe and warm, and she has been given medical care she needs, and ready to have a healthy set of kittens. I couldn't have done this without this round trap. - Emma

It works great. The cup for the food isn’t really ideal but it comes outAnd you can still use something else to put in the bottom. Cup into deep and too small. Needs to be shorter or wider so they can at least get the food. Or you have to fill it to the top and then it will all spill all over the place once you tilt the trap over to carry. Other than that I love it! - Light weight, easy to transfer,

I think this is a great trap. We have not had any luck with it so far, not for the lack of trying. we are trying to trap the second of 2 sisters at a property we have already sold, and the new owners are nice enough to let us continue to try to trap her. Her one-eyed sister has been in a large (15X5) kennel for much longer than was intentioned, waiting for her big sis caregiver to arrive. She is just so savvy, even tho we have tried all sorts of camouflage tactics. This is one nice thing about this trap-it can be somewhat covered. We use camo fleece, and I cut cedar cuttings around and on top-even some flat branches to put on the floor (clear of the door mechanism, of course). Dry food, smelly food, raw meat, sardines. ( We have also used it uncovered, just to rule that out as a reason). We are only trapping on nights that go into the high 30's, and we remove the trap entirely if the temp dips and replace the kibble. We stop feeding for at least. 36 hrs. before we set the trap up again. All of our older traps have a metallic finish-I might try spray painting them. It breaks my heart to think of this girl being left behind, as the whole property will be cleared and the house removed, so, back to the drawing board! - Pati

Solution to the problem

It no longer than 1/2 hr before I heard the capture of the critter. Great design and very easy to set up. Thank you - Anonymous

From a distance, saw the feral cat smell the food and figure out how to go inside and around to it. The door closed immediately. Has a handle, easy to remove the cat from the top and placed in a carrier for her neutering and release in a cat colony. Very happy I got this! - Frank W

This is an interesting design and in theory, should work well, however my very feral cats are too smart to go in it. My domestic cats got trapped in it within 5 minutes, but all the feral cats outside were too suspect of it to even attempt entering (even while being hungry). I still think this is a great product for the average cat. I’ve been trying to catch one female for 7 years and she has alluded all traps I’ve tried. I’m going to try a net next! - Pam

This is a great product wish I would had come across it sooner. The feral cat I had been trying to catch for over a year, 3 litters later, would not go in the standard live trap. Tried everything to catch her. The roundtrap worked great! I mention it to other friends, even my vet. And they aren't aware this trap exists. Maybe you will sell more now!! This is a excellent product. The guy that invented this kudos to him!! - Nancy