Reduce the need to re-load blanks with our seven shot launcher.

With its swing-out cylinder with a capacity of seven blanks, this is our most convenient and fastest-firing pyrotechnic launcher.

Simply load the cylinder with seven 6 mm blank primers, insert your Bird Banger, Screamer Siren, or Bird Banger EXP cartridges into the muzzle, cock the hammer, point the launcher down range at a 45 degree angle, and pull the trigger.  Re-load Banger or Screamer into the muzzle and repeat.

For your protection, always use ear and eye protection when firing pyrotechnics. Avoid firing in close proximity to humans, livestock, dry vegetation, or other flammable materials.  The 15 mm seven shot launcher should only be used outdoors and should never be fired from a vehicle.

Our seven shot launcher should be cleaned regularly to prevent carbon build-up in the barrel and chamber. 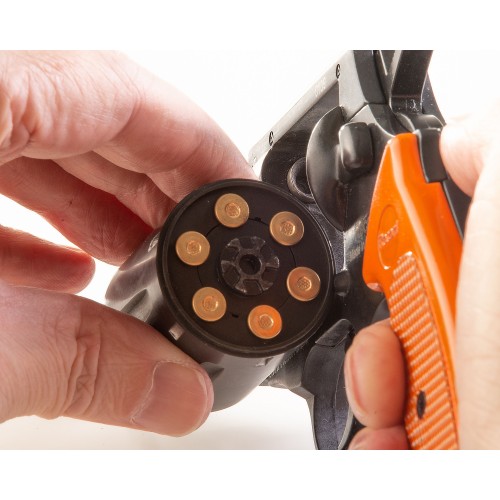