Model DT1 is our feral cat drop trap designed with help from the Neighborhood Cats organization.  This feral cat trap collapses to 36"x18"x3" for easy storage and transportation and is easy to set up in seconds with no tools required.  When set up this trap measures 36L" x 36W" x 14"H for a total of 9 square feet of trapping space.

These convenient feral cat traps allow you to catch wary or trap shy cats with a simple pull of the string.  The drop trap comes with a built on prop, easy release sliding door, and a weight flap to hold the trap in place.

The easy release door lines up perfectly with model 306NC transfer cage and features attaching spring clips provided on the trap for secure transfer from trap to transfer cage.

Drop traps are simply the most effective way to catch trap shy cats or multiple cats at one time. (Does not include string) 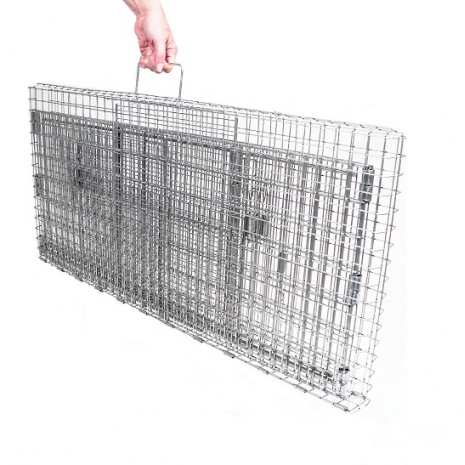 It's a drop trap that you can fold down easily. - Anonymous

There were 3 feral cats near my home. 2 simply would not enter a regular live trap. The drop trap worked quickly and efficiently as well as humanely. Well made and worth the price. - Jim J.

I trap cat for spay and neuter year round. Spring is my busy time, calls flood in about pregnant cats hourly.
I use my new drop trap at two new sites and was able to catch 5 additional cats, each of whom, walked by my standard traps!
This trap will always be in my vehicle ready for use.
- B. D.

i had been trying to catch a feral cat and her kittens who were abandoned by there owner on my property for weeks and the normal trigger traps didnt work, caught all of them in 1 try with this drop trap. the drop trap shipped out a bit late but that was due to Tomahawk having a delayed shipment nothing to do with animaltrapsandsupplies. john kept in contact with me about the info and gave me the tracking number, he was a great contact. 10/10 for overall everything being amazing - briana

I was excited to get this trap. I've been trying to catch this feral mama that kept having litter after litter. She would not go into a conventional trap. The directions were purrfect and the hints quite helpful even tho she wouldn't go toward the light after covering the trap. Had to coax her with the help of a yardstick I had in my car. Caught her and her last baby at the same time with rotisserie chicken pieces making a trail leading to the dish under the trap. Happy to say all four babies and mama are fixed and have been vaccinated. Yea! Success! The only thing of concern was the trap arrived slightly bent on the
top cover part.. I was able to bend it a little so it worked but I suggest putting protection around the edges when shipping. I am sure it was damaged during the shipping process that cost $20! Products should arrive in purr-fect condition. Otherwise everything else was great. 0h I thought the trap was quite pricey but when I got it and realized how ingenious the fold away design is it was so worth it! I recommend this to all feral kitty t/n/r people. - Charlene T.

I was nervous using a large trap..but caught a mom cat who needed surgery and 2 kittens my first week. I say that is a great success! So happy I ordered one. Works wonderful with a transfer cage. Thanks! - Kathy

I was nervous using a large trap..but caught a mom cat who needed surgery and 2 kittens my first week. I say that is a great success! So happy I ordered one. - Kathy

Awesome- just trapped an impossible cat. thank you for making it possible. it was easy and easy to transport too.

we were trying to trap a colony cat who had been box trapped before and just couldnt get him. He had a bad wound. Once he saw the others eating under the trap we got him and a friend: let the friend go using the transfer cage and got him using the transfer cage and forks to guide him in. He got to E R vet and is recovering in a home, will go to a forever foster home next week
Many thanks. Let me know if you want images? happy to share a success story!
- barbara L

My cat ran out of my house after the door was open for a few minutes (normally she just ignores it, but this time, she made a dash and then got freaked out). She won't go into a traditional trap after seeing a local skunk caught in it (another story for another day), but we caught her in 10 minutes once food was set out under this! Perfect for those cats that won't enter a traditional trap. - Anonymous

I wished I would’ve bought one of these a long time ago. We’ve been pestered by raccoons eating the feral food for years! Within five minutes of catching a huge raccoon that would’ve never go in my other trap, it was transferred and on its way to be relocated. Used my Hav-a-heart as the transfer cage by putting boards on the side, arming it, then opening the pull up door. With just a tiny push from a piece of bamboo, she went right in. Be sure you have lots of weight on back flap. Thank you!!! - Gayle

This trap is amazing! It is well built, easy to assemble/use, and most importantly very humane. It comes with springs so you can attach the transfer cage. With God's help, I was able to catch my ferral kitty on the first try. This trap is worth the price I paid for it.....Thank you so much for an awesome product! - Lynn from WA state

I have 3 of these drop traps. They are holding up well and get the job done - Anonymous

After months of trying to capture a female feral cat who kept having litters- finally got her with drop trap. She just didn't want to walk inside conventional trap and other cats were always distracting her. So happy we finally got her and she can have a much better life!! - Joanne Fall

This shipped quickly. The set up was easy, instructions were clear. It works great and has been in the weather for a week now with no issues. - Jessie

This product seemed like a great fit as I was trying to trap a feral cat that avoided my other trap. But then I got him and I was able to cancel my order because this company so graciously understood and credited my money back and cancelled order days later. I don't know too many places that would do that. So even tho I didn't get the item I ordered - I wanted to leave a review because I was so impressed with the customer service. Wonderful company. Please use use them should you need anything. - Dorothy Libby

Got this trap and the transfer unit. They worked seamlessly together to trap feral cats who are leery of the smaller trap units. - Anonymous